Sigh. I left my comfortable apartment in Prenzlauer Berg this morning for parts south of Berlin (Nuremberg, Wurzburg, and Rothenberg ob der Tauber). I am a bit wistful about leaving Berlin, despite my genuine interest in the spots I’ll see and things I’ll experience over the next (and last) two weeks of my trip.

The last ten days of my trip have been ideal vacation days for me. Apart from sitting on Caribbean beaches and snorkeling in their crystal clear waters, I like the activities of my current trip more than almost anything else in the world. Apart from reading (I finished two books) and writing (I believe I’m nearly finished with a draft of one book), there are other aspects of the trip that translate rather well into photos.

Admittedly, I spent perhaps a total of four hours seeing the sights in Berlin, while the rest of the time I dedicated to idyllic pastimes. Here, I’ll share with you a few of my top highlights that could be captured by camera.

Alexanderplatz with TV Tower at night

View of the Berlin Cathedral (it has a much longer name, actually, but it’s usually called this) – built in the 16th century, I think. Founded as Roman Catholic, converted to Lutheranism, then Calvinism, and since then has become Evangelical Protestant

This is probably my favorite photo of the trip so far. It’s in the neighborhood of Prenzlauer Berg, near Schoenhauser Allee U- and S-Bahn station in Berlin, Germany. 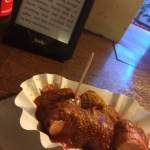 Until next time, Berlin: Tschüss!

And to my new German, Russian, French, and UK pals: See you soon, hopefully.