Würzburg: A Gem in Germany

The (literal) high point of the Marienberg Fortress

Würzburg, situated to the west of Nuremberg and a mere 45-minute train ride away, quickly stole my heart. Less popular than it’s neighbor to the east (though still crawling with tourists at its very center), it reminds me very much of Prague (still the most beautiful major European city I’ve visited). It features a prominent and imposing castle at the top of a large hill, which is met at its base by an old stone bridge (complete with a line of saints’ statues), and the main drag leads to an open plaza at the heart of the city. The streets along this main road are clogged with nick-knack shops, wine dealers, and overwhelmed tourists.

I tried, as usual, to avoid the throngs, and took only one lap through the middle of the city. My best times in Würzburg were spent wandering through all of the winding side streets and pedestrian passageways, along the backsides of massive churches.

Dom St. Kilian Schönborn-Kapelle, bult mid-11th century, in Würzburg Germany; Note the creepy skeletons. (This is the back door, I think, and is less seen and photographed than is the more famous front side of the building)

The city saw only one bombing during the war, so legitimately old buildings of aesthetically pleasing character flank its cobblestone streets.

I managed, somewhat inadvertently, to walk ten miles during my walkabout, and I quite unexpectedly stumbled upon the two major buildings in town. The first, which I spotted after stopping for my first sit-down dinner of the trip (at Le Candele, an Italian restaurant), peeked out from behind a few buildings to catch my attention. I wasn’t sure what it was when I first noticed it, but there was no doubt when it came fully into view: the Residenz Würzburg is simply immense. It comprises three rectangles in the shape of an “H” (with the bisector dropped to the bottom of the letter) and is bedecked with statues, carvings, and two approximately 25-foot stories, plus a rounded roof at its maximum height, which would probably amount to four stories for any normal building. After a brief pause to marvel at the Residenz and its huge fountain in its driveway, I walked quickly through the gardens beside the mansion and decided to find the city’s castle. 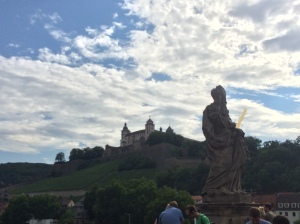 After passing through one of Würzburg’s parks, I pointed myself toward the center of town again, hoping to find it. Walking along, I caught a glimpse of it in all of its glory between two buildings through a small alleyway. Having done a double take, I crossed the street and followed the road, the castle visible the whole way through.

Inside the Marienberg Fortress; Würzburg Germany

It took me another 60 minutes or more to make my way up to the top of the hill, as I managed somehow to take the scenic and longer route through the gardens on the backside of the hill. The switchbacks tired me, but I was invigorated upon my arrival at the series of stone gates and passageways leading into the Marienburg Fortress. From its walls, I could almost make out the former shape of the city, a massive star fortress of the gunpowder age. If you’re going to visit Germany, put Würzburg – stunning in its beauty – on your list.

1 Response to Würzburg: A Gem in Germany