The streets of Berlin’s neighborhoods always seem to be crowded, and the eateries do their best business in many sectors between 10pm and 2am. The trains are crowded all over the city until late at night. While walking one city block, even among the quieter areas of the neighborhoods of Kreuzberg or (to its west and north) Prenzlauer Berg, I am passed or pass by a few dozen pedestrians and bicycles. Bars and pizzerias as well as Turkish, Indian, or Vietnamese restaurants with tables jutting out into sidewalks are crowded places in many central plazas and along the more active streets. “Punk rock” is the vibe in Kreuzberg, while in Prenzlauer Berg things are decidedly more gentrified and uncool – more my cup of tea than the former, artsy, and gruffer neighborhood. I haven’t visited the club districts of Berlin, which I assume are even busier than these other areas of town.

In Kreuzberg in particular, I went for a walk around 11 in the evening, thinking for some reason that I might find the local eateries less peopled than at an earlier hour (wishing, as I sometimes do, to avoid large crowds, long lines, and completely-occupied tables – I had fancied to get a quick bite and sit in solitude while reading from my Keegan WW1 book). Woe be unto him who expects to find peace in a hip neighborhood of Berlin somewhat late in the night! It was much more crowded at 11pm than I found it at 4pm earlier in the day.

A steady stream of young people, shoulder-to-shoulder three or even four across, moved up one concrete sidewalk and down the other. The bike traffic was heavy, as was vehicular traffic of all varieties – taxis, private vehicles, police wagons, and large delivery trucks. A three-chord punk band had set up a live concert along the sidewalk just one block to my west, and a hundred or more people had gathered and were watching intently. Local residents gathered in the neighborhood park, sitting around on large stones or on the ground, playing stringed instruments – and a clarinet, of all things. The restaurants were all packed – at least two dozen of them along my way. The bookshops, of which I passed three, were all closed – alas.

I looped the block, not daring into any crowded food establishment on my lonesome. I stopped at last at a spatkauf near the hostel for a coke and a chocolate snack (1.50 here, 4.00 in the states for the same) – and I had to wait in a line of 8 to do even that. The crowd milling about the late-night shop sat on benches out front, sipping beer and laughing with friends. I stepped to the side of foot traffic, drinking my coke, and even there I had to adjust my position to make way for bicycle-riders pulling over to park their bikes among the dozens out front of almost every storefront and building. To give a picture of the scope of the crowd, which didn’t seem to stop at the quieter and darker bits of walkway a block or two distant to my East and nearer to Treptower Park, for thirty seconds I counted its number. I aggregated based on estimate, anyhow. I counted approximately 140 people actively passing me in that thirty seconds on one side of the street. On a Wednesday evening approaching midnight.

Now, don’t get the wrong impression. These weren’t dangerous hooligans. None among the crowd were overtly rowdy – unlike what I’d expect from this sort of thing back home – but sometimes, I just get a bit of that crowd anxiety, and I want to be somewhere else. I retired to the courtyard garden in the hostel to finish some reading out of doors before heading back to my room.

I wondered at the nightlife in Berlin’s popular districts and suspected at first that perhaps the evening culture is so active here because Berlin is a younger-than-average city. But no, demographic data show that the average age is 43 years, whereas in Rome the number is 42 and in Paris 39. Those are busy places at night as well. Of the 4.3 million residents of sprawling Berlin, over 40% of its population is of the under-35 set. I should note that the spots I visit most while visiting Berlin are the youngest neighborhoods, with the average age being under 40 both in Kreuzberg and Prenzlauer Berg.

Maybe this is a European phenomenon, contrasting with the United States, where nightlife is often ushered indoors after a certain hour and thereby more limited in its scope. I’m not sure, my exposure to the countries I’ve visited limited to a few days here and a few days there; Germany is the only place where I’ve visited several cities for a week or more at a time.

Perhaps its all a bit surprising to me because I’m used to American cities, the largest of which have extremely crowded blocks centered around particular bars or clubs, but the nightlife there really is limited to those locales (with some few exceptions). In Chicago, for instance, or New York – the central hubs of activity are abuzz at night and awash with hordes of drunken people out for a party night on the town. But in Berlin, where nightclubs do remain open until 4am, 5am, or on occasion later still, the activity is in any case less party-centric and a city in which casual strolling abounds for local residents. The atmosphere is decidedly less threatening, as well. 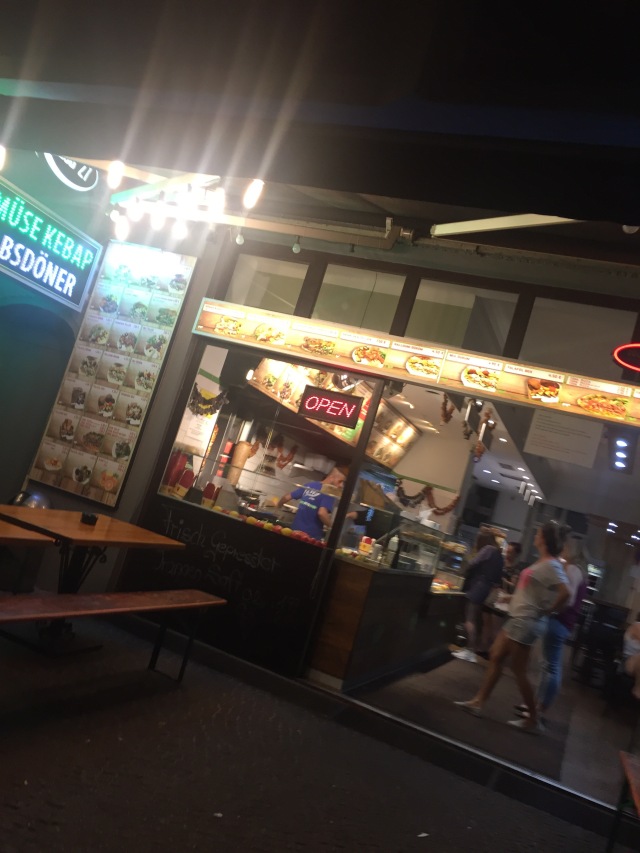 Remember, you can find the summer’s posts all in one handy place – right here!